No Site Specific Data? No problem

The UK is home to the largest operating offshore wind capacity in the world and is ever expanding, building towards  the UK target of ‘net-zero’ greenhouse gas emissions by 2050 – a transition in which offshore wind will continue to have a crucial role to play. Round 4 of offshore wind farm development will take the sector another step forward with between 7GW and 8.5GW of offshore wind power due for development, supporting the continued growth of the UK offshore wind pipeline and with it, the UK’s ambitious decarbonisation agenda.

However, well before any significant site-specific information is available, the developers of these wind energy schemes face questions in preparation of their bids for the lease areas available, such as, “Is it technically feasible?” and “Is it commercially viable?”.

Luckily, there is high level information available pertinent to the first stages of answering these key questions and it comes in the form of open source data. In the UK, where offshore industries such as oil and gas and, more recently, renewable energy have been prevalent for many years, we are fortunate to have good coverage of data required to understand where wind speeds may be sufficient; and where suitable soil types exist for the safe and costly erection of offshore wind farms, before any site-specific surveys are completed.

Recognising the benefits of “Open Data”

In simple terms, “Open Data” means data open for anyone and everyone to access, reuse, and share. Whereas much of the data held by governments has historically been held behind firewalls, or its access has been restricted due to technical limitations, recent years have seen a step-change, with governments, independent organisations, and agencies recognising both the social and economic benefits of improved access to Open Data. This change in approach has led to an opening of the floodgates, with many agencies throughout the UK, Europe and the rest of the world aiming to provide more and more data for free, with easy access. This in turn can be leveraged by consultancies like Cathie, to provide an initial understanding of the potential risks to the project and possible options for development.

Open Data repositories typically provide downloadable content which can be  interrogated by the user as well as spatially-enabled data which can offer a spatial definition of the site characteristics and potential hazards. Many web-based, downloadable data repositories exist such as the British Geological Survey (BGS), the European Marine Observation and Data Network (EMODnet) and many more, providing useable data for an assessment.

Open Data repositories can even provide detailed information; but these are typically highly localised, and are not always suitable for a broad analysis of multiple sites for an initial selection process. This is because including them in a larger scale model could skew the results by providing more data in some areas than in others. However, these datasets are useful to include as we refine the site selection and assessment in later stages to achieve the goals of the project. By leveraging this greater level of data it allows for more confidence in the site characteristics and therefore helps to minimise project risk.

In the context of Round 4 in England and Wales, developers face the task of identifying the optimal wind farm site from within large bid areas, often far from previous marine activity, where primary surveyed data can be at a premium. Conducting new surveys over such large areas, and with limited development budgets, is unlikely. The challenge, therefore, is to improve the overall understanding of – and confidence in – a site, based purely on existing third-party and open-source datasets. Carrying out a constraints exercise can help to find potentially suitable areas, which maintain the commercial goals of the project and are technically feasible. Equally as important, a constraints exercise can help to eliminate areas seen as too challenging or costly for the developer’s chosen technology.

Although open-source data certainly does not form a replacement for primary surveys, at the early stage of development these data sources provide an invaluable insight into the spatial characteristics of a wide development area, from which the first steps can be made towards defining development constraints. Once defined, a common next step is to feed these development constraints into a weighted overlay, or “heatmap”, analysis exercise, which produces a structured and traceable spatial representation of an area’s development suitability. 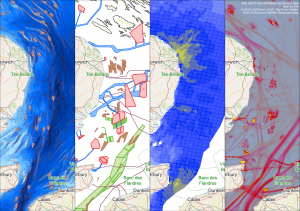 Looking at the challenge of developing a new wind farm from a commercial and consenting approach firstly, the primary project goal is to provide as much power back to the grid as possible. Therefore, in its simplest form, the wind resource of a site must be sufficient to allow the blades to turn and power generation to take place. To represent a constraint such as wind resource in a heatmap model, a bare minimum value (an absolute wind speed below which development would not be feasible) should first be defined. This score – known as a “hard constraint” – will be considered unsuitable for development and removed from any future potential development areas. The remaining area is, by definition, considered potentially suitable for development based on wind resource alone; but with varying levels of production/ suitability, dependent on wind speeds. This remaining area is therefore reclassified based on a sliding scale, where “suitability” increases as a function of wind speed, to produce a wind resource “suitability” map of the developable area.

Further constraints, containing many other aspects of the site, can be processed using the same method, ultimately resulting in individual suitability scorings for each development constraint. Although the constraints considered for an early development-phase heatmapping exercise can vary markedly from site-to-site, the following are commonly included. Data for all these themes are available, to greater or lesser levels of detail, from UK Open Data repositories:

Data for each of the themes listed above, and any others pertinent to the site, are then reclassified and converted into spatial constraint grids with a scoring system of suitability developed spatially. The resulting individual suitability grids – one for each constraint theme – often provide useful insights into a site’s suitability on their own; however, at this point it is also possible to combine these individual grids to give and overall heatmap score, representing a relative level of constraint, as shown in the example, figure 2, below: 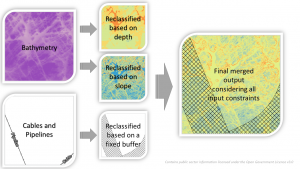 Fig 2. An example workflow to construct a heatmap based on bathymetry and existing infrastructure

The overall constraint heatmap should outline areas of lowest risk to the project and most feasible areas for development. This will then provide a basis for concentrated efforts of further assessment of the site including more refined restrictions for the placement of turbines or cables and the initial optioneering, to define the technical solution and build the initial financial model.
Foundation optioneering is a key element of this and will be defined by the soil type, strength characteristics and thickness, as well as the bathymetry. Further to this, as technology advances and deeper waters are considered for wind farms, floating wind turbine solutions will become more prominent, and new solutions are actively sought out by the Crown Estate as part of the technical review of the bidding process. Areas which are technically suitable for the development of floating solutions can also be defined by the heatmapping process and taken forward as a development option.

The data available for access before any survey data can be acquired may not have the detail for full project engineering design and detailed costing models, but it does provide the opportunity to begin to answer those key questions. By classifying the risk areas as well as outlining possible solutions and site layouts that are needed to supplement the bid information; it’s possible to provide essential spatial insights to the developer and the Crown Estate that a commercially viable solution can be sought.

To find out more, why not listen to our presentation on Improving LCOE Understanding With Leasing Stage Ground Models.

This article was originally published in Energy Engineering Magazine in 2020.